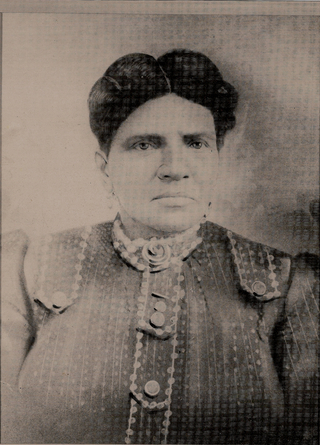 Great-great grandmother Elizabeth Fortner
Okay, here we go: as I sit here staring alternately at the calendar shouting an impossibly futuristic year (2012?!) and a manuscript page screaming, “Revise me, please!” I feel rooted to missed opportunities and silly regrets.

Sure, these reflections might be just another form of procrastination (see my first post). But clearly time is marching on, and it often seems to be trailing me far behind. And so my unruly mind goes back to a talk I gave once, when I spoke about the meaning of the word advancement:

" What does that mean to me? I am the great-great granddaughter of a dormitory maid at Louisiana Normal School. She also raised roses, and planted the first rose garden on the campus.

I am the great-granddaughter of a dormitory maid at Louisiana State Normal College. She took in students’ laundry on the side. I learned all about Argo Starch from her.

I’m granddaughter of a young woman who began working in public schools with a high school teaching certificate. She went to Grambling College in the mid 1950’s to get her education degree, because Louisiana Normal, newly named Northwestern State College, was still segregated.

I’m the daughter of a 1957 graduate of Grambling (yes, she and her mother were there at the same time), who received a Master’s degree in education in 1967 from Northwestern State College.

This has been the movement of the women on one side of my family.

On the other side, I am the great-great granddaughter of a slave who became a mother of 14 surviving children and was a sought-after midwife. She was about eighteen years old when the Civil War began and died the year before World War II ended.

My paternal grandmother was a maid in New Orleans’ architecturally famous Garden District. She, too, took in laundry on the side, and one of the cast irons she used sits as doorstop in my kitchen today. She stayed married for over fifty years to a man who forcibly derailed her repeated attempts to complete an eighth grade education."

Now, this revisit has required some rethinking on my part. Missed opportunities? So I could’ve picked a different college major; traveled to study foreign language; stayed and fought my way to a reporter’s job at a major newspaper, instead of chucking it to write for kids. Silly regrets? Why didn’t I move to Brooklyn when I first came to New York? Learn to wear make-up? Force my kids to take music lessons?

The facts are that graduated from Northwestern State University in 1977 with a degree in Journalism, having walked across the same grounds where the aforementioned roses once thrived. I've been married for over 28 years to a man who has always supported me and my attempts to become a published author, discusses anything from politics to the Red Carpet fashions with me, and actually pronounces the name of my home town correctly and with pride. I’ve just been on my first national book tour, have a wonderful circle of friends and writing colleagues, and am raising four young men whom I love and like.

Hmmm. Perhaps the lesson here is that reflection has no value unless it’s deep and honest. Perhaps my definition of advancement is incomplete: I told the audience that it was forward motion, progress. I have forgotten that to progress, one must have a starting point. The women in my family have been propelling themselves forward for generations, marching through decades without allowing the very real obstacles of their lives to hold them back. These women are my anchor, and it’s in my blood to keep moving.

Hey Denise!
The blog is refreshing. Altough, I'm reading it a little late (haha), it's right on time for me. I started out this year with a bang-knowing what my goals were for this year. But, as always, life happens and somehow I am derailed yet again. I try again!

Reesie Boone is about to celebrate a big birthday, and showoff her fashion design skills. But an unwelcome visitor--Hurricane Katrina--creates chaos for Reesie, her family, and her beloved city of New Orleans.

No Ordinary Sound
In 1960s Detroit, music-lover Melody Ellison learns to lift her voice for justice and equality.

When Dr. King was a boy, he learned something from a friendship that he never forgot.

A Matter of Souls
From the shores of Africa to the bowels of a transatlantic ship to a voting booth in Mississippi to the jungles of Vietnam, all human connection is A Matter of Souls.

Dare To Dream...Change the World
"Word to the Wise," included in an amazing anthology of poetry for children.

Meet Cecile
Cecile Amelie Rey is a free girl of color in 1850's New Orleans. It's an exciting time in her life-- when she meets a new friend, unexpected adventures begin!
Troubles For Cecile
Find out how Cecile learns to deal with some difficult problems, and learns a lot about her own strengths.
Cecile's Gift
Every person is special, Cecile learns. But what, exactly, is the gift she has to offer her family and her beloved city of New Orleans?
The Adventures of Midnight Son
“In a voice strong and true, Patrick’s narrator easily carries the story, winning readers; hearts…”
–Kirkus Reviews